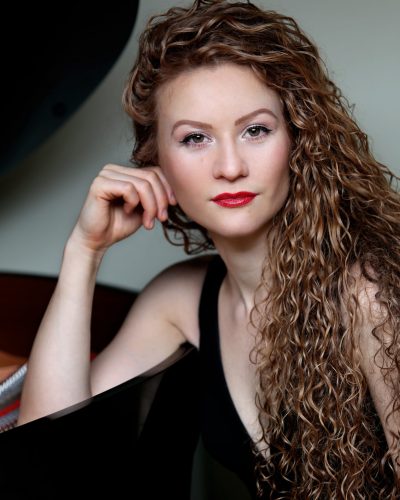 International Concert Pianist, Asiya Korepanova, is known for her touching artistry and astounding virtuosity and has been featured by prestigious concert series and orchestras throughout the world. A true ‘polyartist’, Asiya’s numerous compositions and transcriptions have garnered her acclaim as a leader in this field. Her boundless creative impulse and many artistic skills led to the creation of an innovative new performance genre in which her poetry, artwork, and performances are combined. In this program, listeners will experience the fascinating evolution of Chopin’s style over the years as well as the heart-wrenching lyricism for which Chopin will never be forgotten. In addition to performing audience favorites like the Fantasy in F minor and the third Sonata in B minor, Asiya will present the World Premiere of her transcription of Chopin’s Polonaise, Op. 3 for solo piano.

*Will stay active for 2 weeks to subscribers, a link will be e-mailed after ticket purchase

The only pianist currently performing Liszt’s 24 Etudes as a single program and one of few to tout a concerto list that features over 60 works, Asiya Korepanova is a pianistic powerhouse. A result of her uncompromising dedication to the arts, Ms. Korepanova is recognized not only for her achievements as a pianist, but also for her work as a transcriber, composer, visual artist, and poet.

Asiya’s contributions to the solo piano literature —including her historic solo piano transcription of Richard Strauss’ ‘Ein Heldenleben’ and that of Rachmaninoff ‘s Cello Sonata and Mussorgsky’s ‘Songs and Dances of Death’ — have given her a place among today’s formidable transcribers. A number of her transcriptions have been recorded through her YouTube vlog project, ‘Midnight Pieces’. Launched in September, 2017, Asiya shares 53 performances of short works. Among these are well-known works, Russian compositions, obscure works, and original transcriptions.

Uninhibited in her artistic expression, Asiya’s communicative desires have culminated in several projects featuring original poetry and visual art that serve as an interpretive commentary to a particular cycle of works for the piano. These cycles include Liszt’s Transcendental Etudes, Bach’s Well-Tempered Clavier, Tchaikovsky’s 18 Morceaux, Op. 72 and, most recently, Mussorgsky’s Pictures at an Exhibition. Asiya’s live performances of these compositions have astounded audiences and organizers alike.

In 2017 Asiya founded ‘Festival Baltimore’, a two-week chamber music series and summer academy dedicated to the performance and study of complete cycles. Rapidly growing in reputation, festival has already solidified itself as a highly original musical series and academy.

Furthering this effort, Ms. Korepanova founded ‘Music for Minds’, a non-profit organization that serves to promote classical performances in classrooms as well as to found and support music festivals featuring unique programming.

Asiya was born in Izhevsk, Russia, to a musical family. She began to learn piano when she was 4 years old from her mother, her first piano teacher. She was taught to read music in orchestral clefs by her father, an exemplary composer, at the age of 6, and started composing her own music. At 9, she made her orchestral debut, playing Mozart’s Concerto No.8 with her own cadenza, and performed her first philharmonic recital.

Her love for new music has come effortlessly as a result of her early bond with composition. She was invited to premiere 3 piano concertos by Vladislav Kazenin and Shamil Timerbulatov, with the Svetlanov Symphony Orchestra, the Saint Petersburg Capella Symphony Orchestra, the Ural Philharmonic Orchestra and the Tatarstan National Symphony Orchestra. Additionally, she has presented the premiere performance of various works by Michael Daugherty, Thomas Sleeper, and Orlando Garcia, among others.

Throughout her formative years in Russia, Ms. Korepanova received various awards for her prodigious abilities. These include the Russian Federation’s President Award for “Exceptional Achievement in the Arts”, the National Award from the Republic of Udmurtia (2002), Germany’s Berliner Salon Award (2003), and Russia’s Youth Triumph Award (2005), the title of ‘Honored Artist of Udmurtia’ (2009). She is the Moscow Philharmonic Society’s artist.

In 2012, Asiya moved to the United States at the invitation of renowned pianist, maestro Santiago Rodriguez. Later that year, she was awarded the Gold Medal at the Nina Wideman International Piano Competition – an accolade which proved invaluable in the establishment of her concertizing career in the U.S.

She has since continued to garner national attention with performances at the Stern Auditorium at Carnegie Hall, the Bargemusic Series, the Phillips Collection, the Dame Myra Hess Memorial Series, the International Miami Piano Festival, and countless others. Ms. Korepanova has been featured on CNN, NPR stations, WFMT, and WETA.

In addition to her busy schedule concertizing as a soloist and chamber musician, Asiya eagerly anticipates the premiere of her latest transcription work – the Manfred Symphony by Peter Tchaikovsky, to be released as a filmed performance, as well as the long-awaited release of her CD album of complete Rachmaninoff piano sonatas, including her piano transcription of his Cello Sonata, the score of which will be published at the same time.