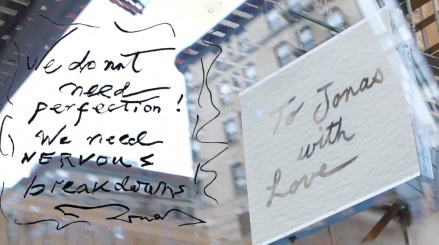 Three programs that will consist of one of Jonas Mekas’ feature films that speaks to his mission of personal cinema. He believed that everyone could and should create a film. Each title will be paired with a different filmmaker whose radical or visionary work Jonas invited into the FMC collection in order to ensure the visibility that he believed these masterpieces of cinema deserve. Curated by MM Serra.

“We do not need perfection! We need nervous breakdowns” ~ J.M.

To Jonas With Love: We find MM Serra at 181 Mott Street – an art gallery in the heart of Soho. The last day of the exhibition: To Jonas, With Love, curated by Chuck Smith, Film Maker of Barbara Rubin and the Exploding New York Underground, Producer and the close friend of MM and  Jonas Mekas. Through conversation MM and Chuck share their stories of Jonas Mekas, the founder of The New American Cinema Group and arguably one of the more prominent/commercialized  experimental filmmakers of the underground film society. He was and is the great connector to the artist who came together to support one another in the underground. Through B Roll of the exhibition and footage from Jonas Mekas’s film excerpts and filmmakers discussed, Barbara Ruben, Marie Menken, MM Serra, Jack Waters, personal footage from friends and family – we get our first crash course in the history of the experimental film community.  A collaboration with Emily Singer. 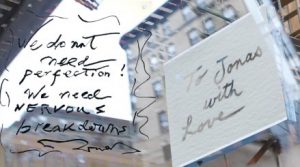 A motion picture composed of brief diaristic scenes not used in completed films from the years 1960-2000; and self-referential video footage taped during the editing. Brief glimpses of family, friends, girl-friends, the City, seasons of the year, travels. Occasionally I talk, reminisce, or play music I taped during those earlier years, plus more recent piano improvisations by Auguste Varkalis. It’s a kind of autobiographical, diaristic poem, a celebration of happiness and life. I consider myself a happy man. – J.M. 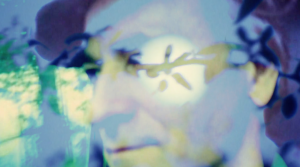 A filmic portrait of the artist’s mother, Mildered Owens, and her friends Irene Collins and Nettie Thomas, set to a score of 50s and 60s hit songs. Using Baroque lighting techniques, Owens captures the three women drinking and lounging one evening.

Both were shot in Chicago, and bring his formidable repertoire of techniques to bear upon nonfictional subject matter: his own family and their circle. 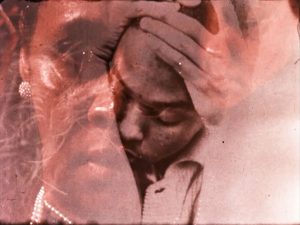 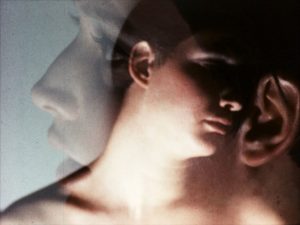 Jonas championed the radical vision of Edward Owens, who was a queer, African-American filmmaker, active within the New American Cinema Group of the 1960s.